You are here: Home / Frugality / My frugal heating pad 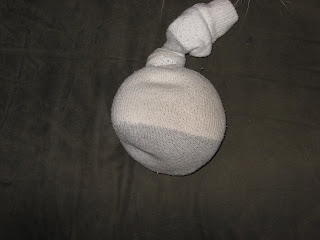 When we moved, one of the things we jettisoned was our heating pad. We rarely used it, and I wondered just how much use it would get in a desert environment. It seemed like a logical decision at the time. But, of course, we ended up needing it the first week in our new place.

We realized we would have to do something. I was in favor of just trying to find one at a thrift store. Tim, however, was hoping for something more immediate. Later that day, at CVS, he held up a heating pad and asked if $15 was a good deal. Our last one cost $2 at Value Village. I was not paying $15 to replace it.

Instead, when we got home, I employed a trick a friend once taught me. I grabbed an old sock, filled it with rice, and tied it off with a knot. I put it in the microwave for 45 seconds, then handed Tim his new heating pad.

At times, I even consider this one superior to normal heating pads. For one, it uses less electricity. The rice generally retains heat for upwards of a half hour with only a minute’s worth of microwave use. Even better, you don’t have to worry about wiring wearing out some day, or any kind of electrical short.

Also, the sock often stays on better. With the standard pad — a somewhat flimsy rectangle, never quite long enough to wrap around a limb — you often have to weight it into place. This can mean keeping a hand on it, lying a particular way or simply putting something on top of it.

The rice sock, on the other hand, balances quite well. If you fill it less full than I did — or use a larger sock — it will do a pretty good job of conforming to the surface as necessary. Think of it as an early ancestor of memory foam.

You could also use the sock as a foot warmer on cold nights.

Back before electricity, it was common to warm a bed before climbing in. They would heat a brick or piece of metal, and place it toward the end of the bed. It made the otherwise freezing-cold sleeping surface a lot more pleasant.

Good concept, but the rice sock improves on this by not having the tendency to set the sheets on fire. I consider that a major plus. The same effect could be had with a hot water bottle; but a sock and some rice is probably less harmful to the environment than a bunch of rubber. And it’s certainly cheaper.

The only potential downside to this is that heated, uncooked rice has a distinctive smell. It takes a time or two to get used to. Frankly, I find it kind of pleasant and comforting. But it could just be me.

Do you have any frugal shortcuts for common appliances/modern conveniences?